eshop@zetor.com
Transport How to do it Terms and conditions Magazine

The family company from Znojmo produces wooden models of means of transport and machines. Though they are meant for display, many of them are in active use on kids’ rooms’ carpets. Large companies are among their customers as well.

‘From time to time, we want to surprise our fans with something unexpected; like a swivel joint or a telescopic arm,’ says Martin Navrkal.

As a little boy, he planned to build a Tatra snowmobile so he would not have to walk up the hill when skiing. ‘Now, I’ve got at least a miniature of it,’ says Martin Navrkal from Znojmo, laughing about the memory. His original profession is architecture; yet, now he is involved in the manufacturing of wooden models and kits. He says that he lives his dreams at least in a small scale.

It was his wife Hana who came up with the idea to start a family business. She worked as a nurse and it was difficult to find the time that they could both spend together with their four daughters. For this reason, they made the decision to make business from home.

‘I expected she would head for some activity she likes, like needlecraft. But in the end she tried wood. When she asked me to make a drawing of a horse and carriage for her, I was hooked, too. Only the result was a little bit different: instead of a horse, it was Zetor 25 and Tatra 148 fire engine,’ says Mr Navrkal describing the beginnings of the family business called ‘Vrky spolu’. ‘We definitely don’t have more free time but we can spend working time together,’ he says.

The first customers were Czech international companies Tatra Trucks and Zetor Tractors. As the spouses say, both of these companies employ dedicate and passionate fans. ‘Martin is so enthusiastic about our partners that a year ago he got his driving licence for tractors and trucks,’ says Ms Navrkalová.

For manufacture, the couple uses mainly birch plywood which they prefer for its unobtrusive wood pattern and sufficient rigidity for models. However, it is not easy to get in the requested quality and it is more demanding in terms of production and inspection.

The company offers trucks, passenger cars, tractors, buses, planes and construction machines. Their aim is to enjoy the model’s design and production and they want the same for their customers. ‘Wheels are turning, tractors lift the blade, harvesters move in multiple axes. From time to time, we want to surprise our customers with something unexpected; like a swivel joint or a telescopic arm,’ says Mr Navrkal.

His daughters did not take long to get the skill to draw their own products.

Inspirations for their models come from everywhere. Lately, they have been approached by the manufacturers themselves with the request to build kits of their machines. ‘Yet, most frequently I am inspired by the vehicles that I admired when I was a little boy and I admire still. So far, the designer of the Vrky models has been me. But I am happy to see that my elder daughters are already able to draw a product that makes sense,’ says the head of the family.

It is his original profession that allows him to think in spatial connections and, when designing, concentrate to emphasise the fundamental features of a specific vehicle and simple assembly. The models are not meant to be too difficult to assemble. ‘I am proud to stress that I am a true-born Znojmo inhabitant. The city, famous for its high-quality wine, generally stimulates creativity of the human spirit,’ says Mr Navrkal in a funny overstatement.

His wife confirms that when Mr Navrkal sits down by the computer on early Saturday morning, half of the model is done before she gets up. 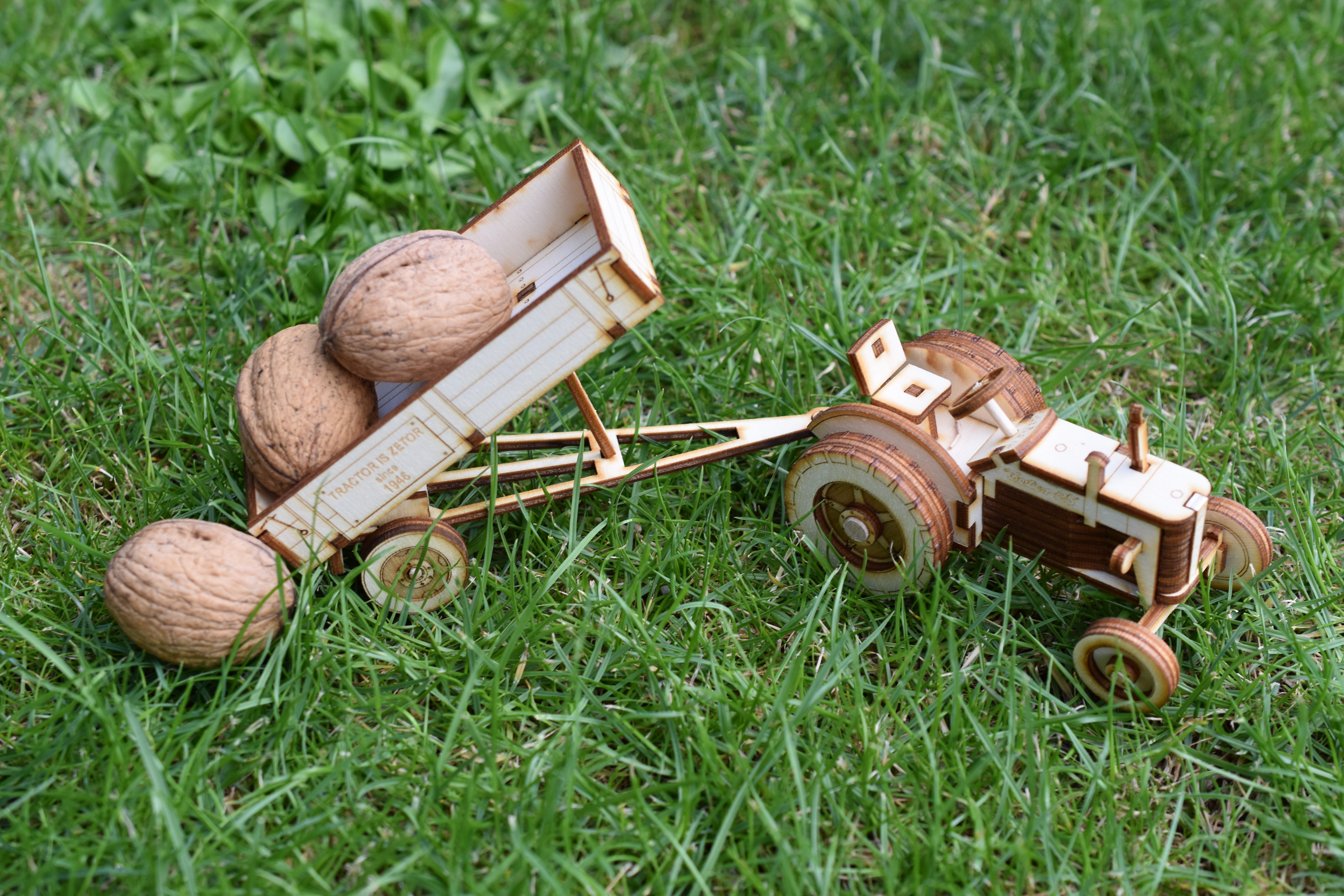 ‘Most of the time I don’t even manage to tell him if I agree with the selection of the car model; it’s simply done. Then I bring him food and drink all day. The girls laugh that their dad is in trance again. Early afternoon he usually enthusiastically presents his first prototypes. Then he completes manufacture procedures, optimisation and instructions,’ says his wife Hana who is responsible for organizing in-house production and customer communication.

The family is assisted by temporary staff, mostly friends of theirs, and one member of staff called Lenka. They prepare the models in their house and other premises, which starts to be relatively demanding.

‘That’s why we are trying to save an interesting historical house which is however in a bad condition. Soon, we would like to move there and create an environment for us and our customers – a small studio with the possibility to organize art and design courses for kids. Then we can say that we have started as a garage company once,’ say the spouses revealing their plans.

They fight covid with voodoo.

Fortunately, they have returning customers. Many of them own all kits of the portfolio, some of them multiple times.

‘Martin is sometimes surprised by that but I think they are just boys like he is. Our customers are also kids who enjoy assembling the models and then displaying them on a shelf. It’s true that our models are not designed to be played with on a carpet in a kid’s room but we know that some of them are definitely used as toys anyway. The best situation is when our kits connect kids, parents and grandparents,’ says Ms Navrkalová. 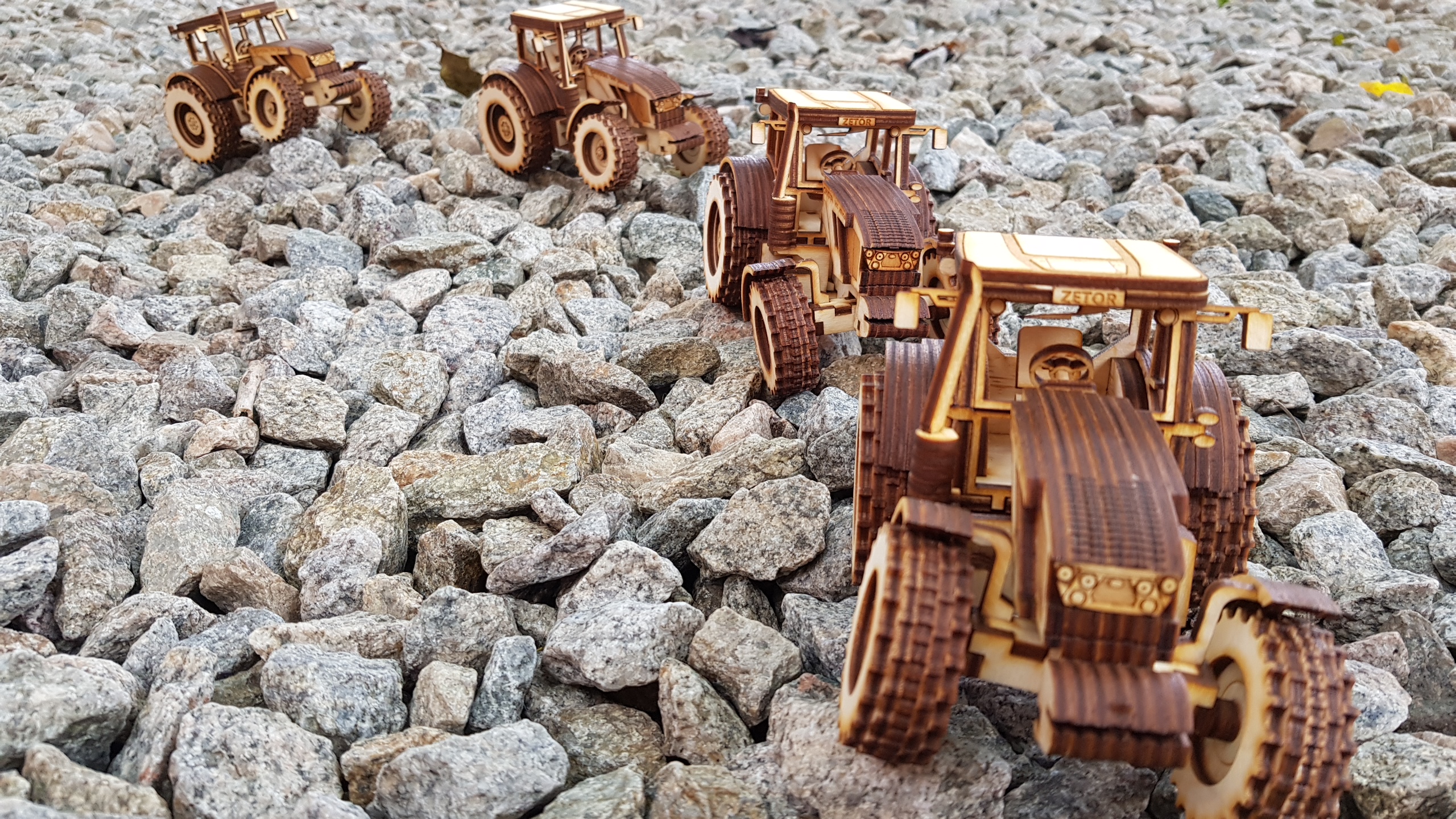 During the pandemic, they succeeded to keep their online sales increasing. They lost some customers among smaller design shops, but they started designing harvester kits for the Swedish company EcoLog. ‘On the whole, we are still profiting, even in this period. Covid made things different, sometimes a bit dramatic, but we still enjoy what we are doing,’ they both agree.

They fight the unprecedented covid frustration through corona voodoo models. ‘I believe they all have been pinched and helped to beat the virus at least psychologically,’ they say. The profit made by voodoo models was multiplied and donated to the ones in need – mainly to kids without parents and young people with autism spectrum disorder. 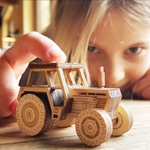